Investors should be concerned because… ! Even though facts that management purports to consider are verifiable, subjective components are unknowable, i.e., not verifiable. ! Consequently, auditors are limited to evaluating whether management has an “appropriate” basis for its estimate ” When the present DOESN’T look much like the past, this can be a big problem. ” Also, it is how earnings management takes place.

Evidence from an auditor I’VE got scars on my back from when I … told my clients that they could not manage their earnings. My clients went to the Board of Directors of the firm and said, “get Walter off my account—just get him off.” Earnings management was rampant … It was like dirt; it was everywhere and I think it’s still everywhere because the accounting standards that we have today still allow management to have control of the numbers. The allowance for doubtful accounts—management controls that number. … The liability for claims – management controls that number 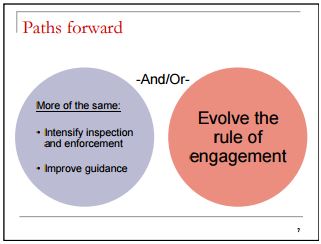 Fortunately, though, I won’t need to say much about how I know what investors should want. This is because the question we are dealing with today is very specific; and in my opinion, there is little controversy about the answer.

Before providing my thoughts on how unbiased estimates could be produced, I first want to share my perspective on challenges to auditing numbers that have a judgmental component.

Today, the balance between verification and attesting to the reasonableness of estimates has shifted dramatically. Therefore, I want to ask whether the evolution of the fundamental rules of audit engagements have been responsive to that shift.

Basically, AU § 342.03 states that management is responsible for the judgmental components of financial statement numbers; and what management chooses to consider when forming its judgments, is a matter of management judgment itself.

This longstanding foundational rule — which to the best of my knowledge has no direct basis in the securities laws — may have worked well enough in the past, but perhaps it needs to be re-examined. Does it promote the unbiased judgments that investors should want, or does it hinder them?

Let me ask the question a different way. Imagine that Accounting Professor X permitted students to grade their own exams. In determining one’s grade, a student may take into account the intention to learn the material better during the coming months while studying for the CPA examination. Professor X understands that she must rein in unreasonably high grades, but that’s not as easy as it sounds. All of the students are giving themselves the ‘benefit of the doubt,’ so to speak. Under these rules of engagement, Professor X certainly can’t, and does not wish, to confront every student and remove the bias from every grade.

Despite its obvious flaws, Professor X must like her system. We know this, because she is the one who wrote the rules into the course syllabus. Whatever the costs of the flawed system and whomever should bear those costs, we also know that Professor X has fewer confrontations with students over grades than any other professor; and the students must think that she’s really cool.

So, here’s my question As a future employer of Professor X’s students – who will rely on grades to identify her best students – are you being well-served by the rules of engagement for her class? What if the entire university system permitted students to grade their own exams?

My point is that AU § 342.03, however it came into existence, from an investor perspective looks like a standard created by auditors to benefit auditors. And management, like Professor X’s students, is happy to play along. But, the system does a disservice to investors, because it deprives them of unbiased judgments — and ever more so as accounting standards increase in complexity.

To summarize, AU § 342.03 is a foundational rule of engagement, and it is not conducive to unbiased judgments. Even the most highly-qualified and intention-ed auditors can be put between a rock and a hard place.

Consequently, under AU 342.03, the best that an auditor can do is to subjectively evaluate for itself whether management has an “appropriate” – or some would say “reasonable” – basis for its estimate. When the present doesn’t look much like the past, this can be a big problem. Personally, I find it most concerning that these rules of engagement enable inappropriate wealth transfers from investors to managers. Investors should not be content with a system under which management is essentially permitted to grade its own exam.