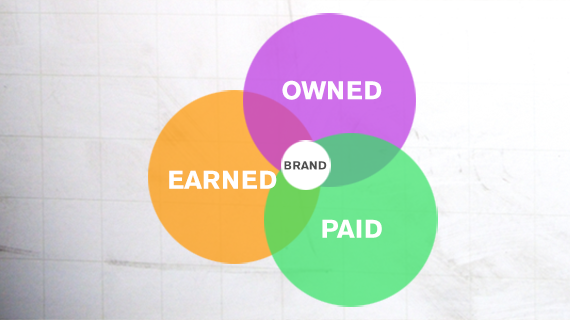 Understanding these three concepts, the role of each and where they intersect is crucial for lead generation and lead nurturing success.

Paid media is the easiest of the three concepts to get to grips with as it simply means any exposure that you’ve paid for. Most commonly, paid media is used to refer to advertising (both online and offline) so activities like PPC campaigns, banner advertising, remarketing and even newspaper, TV or radio adverts would sit under this umbrella. Paid media doesn’t need to represent a huge spend or an ongoing effort – it could just as easily refer to a sponsored post on Facebook, a single promoted tweet on Twitter or an ad on YouTube.Paid media sits at the top of your lead generation funnel because it’s a way of raising your company profile and driving awareness.

Earned media refers to any mention, piece of coverage, content or snippet of conversation about your brand that comes from a third party and appears on someone else’s channel, without you having paid for it.Before digital marketing really hit its stride, earned media would really have been limited to any mention in a newspaper or magazine or on TV or radio.

Today, the spectrum is much broader and while it still includes all of the media mentions generated as a result of your PR efforts and things like being quoted in a newspaper or magazine article, it also covers formats such as online reviews, mentions in blog posts (that haven’t been paid for as part of an influencer outreach campaign) as well as tweets, retweets and shares on social media. This sliver of the triangle could also include a customer mentioning your website in a forum post or comment on a blog post.

In short, it’s any positive mention that you haven’t paid for. Because the content comes from a third party, earned media is very powerful. It can be seen as more credible than paid media and will perhaps have a broader reach than owned media.The other important thing to note is that you have no control over earned media. It lies squarely in the hands of third parties, be they fans, customers or members of the press.

Owned media encompasses all of the brand assets that you physically create and control. This list will include your website and social media channels. It also refers to any ebooks you may create, videos you film, blog posts you write, apps you build, brochures you print and even emails you send.While your owned media shouldn’t be relied upon to generate leads all on its own, it can be used to nurture leads acquired through other sources and encourage them further through the sales cycle.